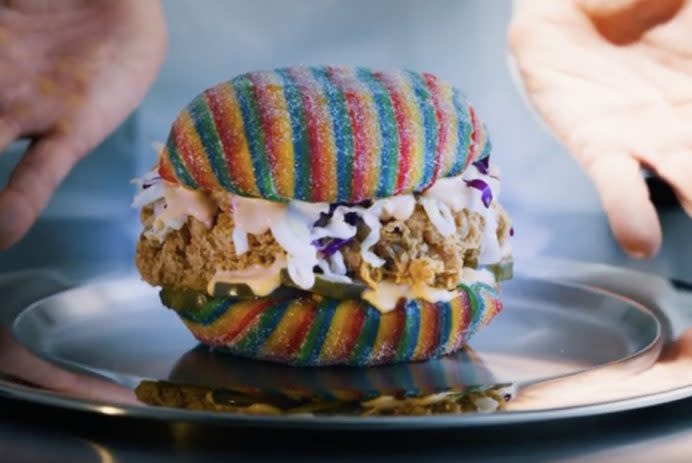 It’s 2021 and we officially have an Airheads chicken sandwich.

The Chicken Sandwich Wars have been ongoing for over two years now, with Burger King, Taco Bell and even Pringles throwing their hat into the ring. Now, it’s Airheads’ turn.

The Airheads chicken sandwich is certainly something to look at. It sits on a sparkly, rainbow-colored bun made out of Airheads Xtremes. Beyond that, the fried chicken is topped with coleslaw, spicy mayo and pickles, according to Food & Wine.

Airheads debuted the snack at Frances’ Deli & Brunchery, a restaurant in Chicago. It was only available for a day, but that was more than enough time to set social media ablaze.

How to pack the perfect weekender bag:

Twitter users had plenty of thoughts about the Airheads chicken sandwich, with some calling it “gross” or “disgusting.”

However, other users were a little less judgmental. Some said they wanted a chance to try it.

The divisive snack item harkens back to plenty of similar items that have gone viral over the past year. In 2020, Burger King Taiwan sent social media spiraling with a limited-edition “Chocolate Whopper.” Meanwhile, Pizza Hut U.K. sparked a debate with a “Christmas Pizza” that featured gravy instead of sauce.

As for the Airheads chicken sandwich, it remains to be seen if we’ll ever get a chance to try it again.

Weekend essentials from Nordstrom under $50:

In The Know is now available on Apple News — follow us here!

If you liked this story, check out this article on how to make a “homemade” Taco Bell Baja Blast.

More from In The Know:

The post Airheads made a chicken sandwich, and no one knows how to feel about it appeared first on In The Know.