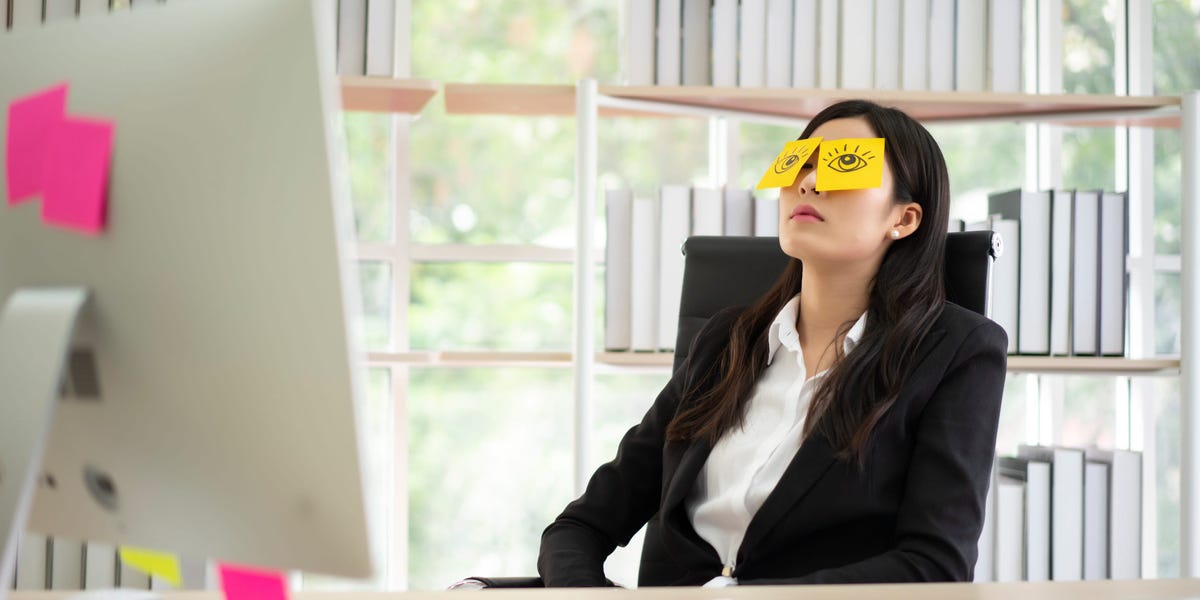 After more than a year of working from home during a global pandemic, many corporate workers are feeling burned out.

While widespread remote work showed companies that employees didn’t need to be in the same space to be productive, it also led to new challenges and exacerbated existing ones:

With fewer boundaries between their jobs and home life, people worked longer hours, according to studies from Asana and Microsoft. Communication and collaboration tools like

Slack
became imperative to keep business going but also meant people felt the pressure of constant communication or “Zoom fatigue” from spending too much time in video meetings.

“The unintended consequence of the proliferation of business apps and the many hours per day workers spend communicating synchronously is that they have lost control of their day trying to keep up with the constant stream of messages, emails, app notifications, and video calls,” said Front CEO Mathilde Collin.  “It’s causing widespread mental health issues including burnout.”

As remote and hybrid work seem increasingly likely to stick around even after offices reopen, experts say that it’s essential for companies to give employees tools to help them collaborate asynchronously, so they don’t have to be in the same place or communicating in real-time to get work done.

Insider spoke to her as well as executives from Slack, Asana, and Dropbox — all enterprise software firms with tools that became imperative during the pandemic — about how they’re adapting their products to enable more asynchronous work. They all stressed that software is just one part of the puzzle: Policies and practices that set clear boundaries for employees on how to communicate and collaborate are equally important to making a remote-friendly workplace.

Ultimately, they see this evolution as crucial not only for their continued success in the market, but also to keep their employees from crashing and burning in this hybrid-work future.

Firms are adding audio and video tools to their products

As executives and employees at productivity and collaboration software companies have experienced the need for asynchronous collaboration firsthand, many are rethinking their product functionality.

Slack, for example, recognized early on in the pandemic that remote work meant employees often responded to messages after normal work hours: In a study from April 2020, the company found that the average amount of time users were connected per day increased from nine to 12 hours.

As a result, it started working on new features that don’t emphasize real-time conversation. For example, it’s currently building tools to record short video messages directly in Slack, so things like project status briefings or all-hands meetings can happen asynchronously. People can post videos in a channel for their coworkers to watch, comment on, or ask questions about on their own time.

It eliminates the need for everyone to be on a video call together, said Slack’s senior director of research Christina Janzer, and can work better in situations where a people’s tone or context could get lost in a written message.

Vimeo
. Users can now record short videos that will post in Asana with an automated transcript. The feature is meant to eliminate the need for meetings about simple project updates and add an alternative to written messages.

The permanent shift towards hybrid work also has software companies mulling ways to recreate some of the spontaneity of the office in a virtual setting.

Slack is experimenting with audio capabilities in channels that would allow people to have the kind of “hallway conversations” that people have at an office, Janzer said. Slack’s goal is to eliminate the need to turn all conversations into scheduled, structured events using video chat, she added.

With remote work, people often hop between 10 or 11 apps to do their jobs, an Asana study found, and each time they have to switch it interrupts their focus. But deep integrations between various tools can decrease that need and help enable asynchronous work, said Asana’s chief product officer Alex Hood.

“When we say asynchronous work, we’re really saying individual contributors have the ability to stay in focused flow to do their jobs,” Hood told Insider. The firm has been adding integrations like connecting to workers’ calendar apps, to make it easier to prioritize between tasks from within Asana.

The way you manage your day is key to being able to collaborate on your own time, according to Accel partner Rich Wong. That’s why his firm invested in an app called Clockwise, which schedules meetings in a way that leaves chunks of time open for focused, solo work.

One of the biggest barriers for employees to work on their own time is having to learn the practices and processes of a new workplace, and that’s even more prevalent when people join remotely, Asana’s study found.

Emergence Capital Investor Jake Saper said that’s why he invested in a company called Guru, which is a knowledge management tool that connects to other apps and automatically surfaces information when needed. Guru essentially eliminates the need to Slack someone for the answer to a question, Saper said.

Integrations also allow users to automate processes and eliminate busy-work, said Array’s Gandhi: “Lots of tools can integrate in the right workflow to make you productive.”

For example, Dropbox has integrated its file sharing product with the e-signature tool it acquired, HelloSign, so people can automatically create, share, and sign a document without leaving that app,  said Alastair Simpson, the VP of design at Dropbox.

“There’s a massive opportunity for us to continue to create seamless collaboration experiences and integrations like this that make remote work easier and more viable,” he said.

Even Zoom — which is known for synchronous video meetings that require everyone to be online at the same time — is looking at integrations as a way to make people’s workday more efficient. A new category of apps for Zoom brings tools like Dropbox and Asana into a Zoom meeting.

For example, someone can take notes in real-time in Dropbox while in a meeting and automatically share them with participants as opposed to doing that work after a meeting ends.

Software isn’t a cure-all: Companies need to rethink policies too

While software can help avoid remote burnout, policies around collaboration practices and internal norms are just as important as the tools workers use, execs and VCs said.

Dropbox, too, has created a toolkit for managers as it allows permanent remote work. The kit includes guidelines for which hours should be used for meetings versus individual work, how to evaluate employee productivity and performance remotely, and more.

“As you transition to ‘Virtual First’ work, try to prioritize mutual trust and outcomes above attendance and activity,” its guidelines said. “Instead of measuring how much stuff your team does (for example, 15 projects completed), try measuring the impact your work has (increased adoption of X feature by 20%).”

The company also mandated that communication should be asynchronous by default, meaning that workers will use tools like email, Slack, Atlassian’s JIRA, and its own tool, Dropbox Paper, to manage projects, solve problems, and ask questions. Workers are instructed to only use video meetings when absolutely necessary, like discussing complex or emotionally sensitive topics or for morale building events.

“Company leaders need to rethink everything — from schedules, to social contracts and more — by challenging our basic assumptions about how great work gets done in order to create a better work experience and quality of life for our teams,” Dropbox’s Simpson said.

Atlassian, meanwhile, is implementing policies to make sure everyone is on the same playing field as it opens offices but also allows workers to stay remote. For example, if a team has a meeting and a few people aren’t in the same location, everyone has to join via Zoom even if some people are working out of the same office, co-CEO Scott Farquhar told Insider in April.

It’s also looking for ways to make normally real-time activities asynchronous. So it might use virtual whiteboards for people to brainstorm on their own time versus together on a Zoom call, Farquhar said.

Ultimately, the lesson from this last year for executives is to realize”despite the urge to be “always on,” not every work conversation needs to happen in real-time,” said Front’s Collin.

“Asynchronous communications give employees control over when they communicate with their teammates,” she said. “From what I’ve seen firsthand with employees at Front, having more control over your day leads to happier and more engaged employees, and that leads to better business outcomes.”